This so called impossible-yet-ended-happily journey started in a bright day in August, when Adi invited me and some others PSM-ITB alumni to meet at Plaza Festival to discuss about ‘this year project’. For your information, Octava Choir was established back in 2011, and we (they, actually, because I couldn’t join them in the previous 2 years) usually gather around Christmas time to do some Christmas carol. But this year, Adi, as our founder and music director and manager, proposed us something bigger: to join the Magnificat Choir Competition. 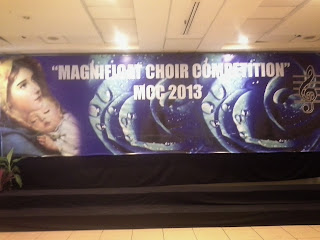 That day, the attendants of the meeting automatically agreed with Adi’s idea. We found this quite challenging, and we even already boasted up about ‘how will we spend the money prize, eh?’ things. Such a silly arrogance, I know. But our adrenaline told us that we could do this, in whatever ways.

But there is no such thing like smooth, easy way in anything. So did in our case. The first difficult we faced were where we should practice. Many options came up, such as Prama’s or Doan’s house, but then kakak Liza (our 2030 IA ITB Chairwoman) proposed a cool alternative: we could use the house of IA ITB which is located in Hang Lekiu (around Pakubuwono area) to do our practice. Wow!

Then the rehearsal began a week later. The IA ITB’s house was far beyond our imagination: it was fully equipped with everything we need. Sofa, wi-fi connection, cable TV, pantry, even they provided tea and coffee there. Heaven (#proudtobeITBalumna :p)! Unfortunately there were some times we couldn’t use Hang Lekiu because the collided schedule with internal IA’s agenda, so we had to find another rehearsal place. Once, we rehearsed at the Plaza Festival and we ended up chased by the security because our voice disturbing people’s peace, hahaha….

Practice venue problem was solved, but another problem came: rehearsal schedule. I started to realize that we were in the different situation as before: now most of us are employee with tight work schedule (even on the weekend!), and our workplace are scattering in different areas. It made us (or Adi, specifically) fluttered about how to arrange a schedule that everyone could attend. Most of the times the rehearsal only attended by less than ten people (although in the beginning we agreed that a rehearsal will only occur if there are more than 12 people attending), and I understand that it made Adi confused, to that extent that one day he texted us saying ‘Bro and sis, should we continue this project or just give it up? I remind you, they will eliminate the choir with less than 20 members performing at the stage’.

‘Bro and sis, should we continue this project or just give it up? I remind you, they will eliminate the choir with less than 20 members performing at the stage’

One by one, our members began to quit this project. Honestly, I myself took quite a long time to consider his saying. I had been skipped the rehearsal few times because of many reasons, and I must admit that sometime I felt lazy to go to the downtown of Jakarta from Bintaro in a peaceful, precious weekend of mine only to rehearse. Plus the crazy work load on October and November, I felt like I want to give up.

But then I remembered that it had been a long time since the last time I sang on the choir. Actually I missed that feeling of being the artist, standing in the stage, singing, harmonizing my voice with the others. Additionally the songs were the sacred ones, which could be my way to praise The Lord Almighty.

Then I came to the decision that I would still join the project -- a decision that I will never regret. To fill up the empty places of the absent members, Adi and Rio took the initiative to invite their friends who were also chorister. Adi brought Prisca, Yuli, and Reza from his another-choir, and Rio brought Tya, Aksa, and Ojan. Wow! Octava were so colorful!

We could not get sufficient rehearsal time because November’s weekends were so packed of another schedule. Once, we were ‘forced’ to do rehearsal in Friday night at Iota’s home. It was a hassle! Together with Ci Caleuy and Yessie, I had to fight with Jakarta’s damn traffic to reach Iota’s home, so did the other members.  Adi decided that our very last rehearsal will be in the D day. Yes, rehearsal in the D day! In fact, even the D day rehearsal did not attended by the whole team because Meichan was still on her way from the airport. Hahaha… Sounds so ridiculous maybe? But this is Octava, people. Haughtiness is the first word in our dictionary, pardon us.

When we entered the competition venue, I began to realize that we were the one who did not wear uniformed clothes. The other choirs were wearing nice uniform, but in our case we just have the dress code: the women could wear anything as long as it is white, so we came up with different kind of white dresses. But I found it fun, because the second word in Octava’s dictionary is pluralism, indeed.

The competition began as we entered the stage. Adi was so trembling in the backstage, while I didn’t experience any tense or increase heart beat or something like that. Maybe my heart is trained to face the professors or specialists before so it gets used to intense situation haha.

First song, Salve Regina, the mandatory one, and I (or almost of us, if I may defense myself, LOL) failed to do a good attack because honestly I (or we) was so shocked! I didn’t look that Henry, our conductor (who was not standing in the front like in the common choir’s setting, instead he was in line with us the chorister as a part of the singers), had raised his hand to give us a start sign. Uh oh…. I started to sing in the third bar, God please forgive me (or us).

Second song was Cantate Domino. This time, I must admit that we did a good job! I love the decision (the very last minute decision, honestly) that Henry will acts as an ordinary (I don’t know how to express it) conductor and standing in front of us. His expression was really brought up our mood, and I enjoyed singing the song soooo much. After we finished our performance that silly grin still hung on my face because I was so satisfied with our Cantate Domino. (you can watch our performance HERE)
After that, we changed our costume and started to plan what would we do next. We didn’t have any intention to wait for the champion announcement, because we feel that ‘oh come on, with that imperfect mandatory song, how come we can take a place? Just be realistic, we better go and have some fun’. So we went to Plaza Semanggi and ate a lot there, continued with watching Frozen for me, Iota, Andre, Ais, and Meichan.

After the movie ended, five of us decided to just go back to our home. So Andre and I took the TransJakarta. While waiting for the TJ, I said to Andre ‘Ndre, have you check your WhatsApp? I begin to curious about the result, although I don’t have any hope on it’. And Andre replied that no, he hadn’t check it. Then I took a look on my phone and found there were 140 unread WhatsApp messages in Octava’s group. My heart began to beat faster, I opened it and the first line I could read up was ‘KALIAN JUARA SATU!’ from Aris. 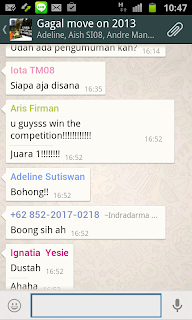 ‘Ndre!! We win! We win! WE WIN!!’ I said (no, more like I shouted it) to Andre in such a crowded TJ. Andre’s eyes began to round and he said his disbelief toward my word. He began to check his own phone and after realize that we were actually won, he was started to join my shock wave. Seriously, how come WE could win the FIRST place?

Only God and the judges could answer that question. For me, it was beyond victory: it was a gift from God for us, also it was a very actual evidence God gave me to teach me that – I will quote the late Mr. Nelson Mandela here – everything seems impossible until it is done. Octava dreamt to be the best, but we faced some hurricanes on our way. We stood still, thrived, keep going, and here we are: champion. We don’t have permanent rehearsal place, we didn’t wear sophisticated uniform, we came from different places and backgrounds, we didn’t have sufficient rehearsal time, but we could made it.

That day, I learnt something from Octava. Don’t stop dreaming. Dream as high as you can. Fight with all your extent, and somehow you will get what you want.
Because God never asleep.

a lil bit of me